On 31 August at approximately 0700 hours a bomb exploded outside USAFE headquarters injuring 22 airmen. The Red Army Faction a well known terrorist group in the 1980's claimed responsibility for the attack. The blast blew out windows and caused exterior damage to the headquarters building and several cars. The bomb was so powerful it blew the hood off one of the vehicles over the 5 story building.
Life after a Bombing
by Robert Mark Anthony

Why? Why do we remember tragedies, wars, painful memories? Why SHOULD we care?

36 years ago a terrorist group stated the following:

"Today, with the “Sigurd Debus Commando,” we attacked the Ramstein Headquarters of the U.S. Air Force in Europe. The U.S. imperialists will not be permitted to prepare and carry out their plans for world domination in peace and quiet." Red Army Faction
August 31, 1981

“I was disturbed from my sleep at 0720 in the morning when the sound of German sirens continued to wail in my head until I woke up. I never heard the explosion for some strange reason. Just as I awoke, someone rushed into my room and stated that an explosion had occurred at Bldg 201, USAFE Headquarters, the place of my employment which is only a couple of blocks from where my dormitory was.” Bill Jackson, USAFE Elite Guard, MSgt (Ret).

“There are certain days in everyone's life that help define or mold them into who they are today. August 31, 1981 is one of those days for me.” David Maes, USAFE Elite Guard, MSgt. (Ret).

During the height of the Cold War, just minutes from us there were Soviet SS-20 missiles positioned in Eastern Europe. However, we were based in the middle of one of Germany’s best wine regions. We were just hours from Paris, Bavaria, the Alps, Switzerland and Luxembourg. Life for the most part was very good.
A U.S. Air Force Airman

“At the age of 20, the bombing of USAFE Headquarters opened my eyes to the terrors of the world we live in. It also opened my eyes to why I joined the military in the first place. I quickly learned about dedication, responsibility, teamwork and self-sacrifice. What started out as just words became a lifestyle almost instantly . . . This tragedy forced me to become an adult much quicker than I wanted to, but it also forced me to make a choice. It helped me to understand what it meant to be one of many who were willing to do whatever I had to support and defend the Constitution of the United States.” David Maes

Why some memories don't fade.

The blast severely damaged cars in the parking lot and pounded the four-story, L-shaped joint headquarters building, blowing down interior walls and smashing equipment and furniture. The dirt and dust obscured one’s vision. Windows were shattered as far away as the north base chapel located approximately 700 feet away. The explosion had been deafening.

“I rushed to the site with the rest of the guys. It was a very long and arduous day. I was shocked to witness a massive amount of damage to many vehicles in the parking lot and the destruction of the huge four-story building. As the work days continued, I was routinely posted on guard duty outside the building in the mess of debris, much of it during the hours of darkness.” Bill Jackson

Why sometimes tragedies could be worse

The VW Bug where the explosion emanated from contained propane tanks. The result was twenty military and civilians injured. A third tank was propelled through the front wall of the building and was stopped by a steam radiator in an office on the second floor. “Media Outlets”

“I was a 20 year old A1C with 2 years in the Air Force and just 2 months in the Elite Guard. Even then I knew anything could happen, to anyone, at any time. But when it happens to you, you feel the full impact of the situation.” Tony Garcia, USAFE Elite Guard, TSgt (Ret).

Why the continual hate?

The West German federal prosecutor's office said a preliminary investigation indicated terrorists were responsible for the bombing, the third that year at an American installation.

“We were fortunate no one died in this bombing, but there were several injured, and we all realized life is just a blink of the eye and it can be taken away very easily.” David Maes

“From that morning on, it was no longer "if" or "when", but "how do we deal with it". We went into 12 hour shifts with no days off. We had to check our vehicle for bombs each time we drove anywhere, which was mostly to work. It made for a long 6 months, or so, before we got extra personnel to cover all the additional posts created after the attack. I learn that you can be in full alert, yet still live life and smile.” Tony Garcia

Why seek to progress

“Looking back on that time, I see how it shaped me into the man I am today. It also taught me a lot about the value of good coworkers. We learned a lot about each other that day and the many that followed. Before the bombing, we were friends that worked at the same place. In the aftermath, we went from friends to brothers. I am so glad that many of us have gotten back in touch with each other and are sharing the events of the lives we have lived since that day and the changes we have been through. Building on that, I learned to try to get along with coworkers better than I had in the past, to give them more slack in most areas as you never know when adversity will rise up and force you to be closer than mere co-workers. It also influenced me in not being as willing to put up with coworkers/supervisors who purposely abused my trust or outright lied to me. If I couldn’t trust someone to tell me the truth when things were “normal” I figured I surely couldn’t count on them to be there when they weren’t. The bombing also made me more interested in the investigative side of law enforcement. It led me to accept the offer when the OSI encouraged me to apply.” Mark Wilson, USAFE Elite Guard, SSgt. (Ret).

Why good can come from bad

“On one such evening I met my future wife and mother of my children . . . all because I was standing guard amidst the upside down cars, auto debris and building rubble. If the bombing hadn't occurred, my life would be different now as I know it. It was about 0300 hours when a female senior airman was running messages to the Communication Center and needed access through my area. We met and talked for quite a while. We married a year later. The marriage didn't last, but we do have two of the greatest sons a father could have. This is how this tragedy impacted me.”

“I re-enlisted not long after this bombing and never looked back for 24 years. I made lifelong friends who today would help me without question. This tragic incident prepared me for the rest of my career and molded me into who I am today.” David Maes

“This moment in time also instilled in me the personal experience to train/teach other based on what we went thru. Others may not realize the training we do at times, but our own experiences can help them understand, even visualize why we do what we do. Even as a young man I would be overly careful and aware of my surroundings. That episode in my life a long time ago, still stays with me today. Enjoy life . . . it passes by so fast. But be prepared for whatever might come.” Tony Garcia

Why does it matter?

“No matter how devastating our struggles, disappointments, and troubles are, they are only temporary.” Josh McDowell

Most of the men and women affected by that tragedy that I know went on to build resilient lives. Some left the profession and started new careers. Others continued on and brought fresh perspective whether at Ramstein or new bases.

“That day started for me when I was sleeping, scheduled to work a 3 to 11 p.m. shift that day. My roommate-Dave Maes and I were woken up by the concussion of the explosion, our dorm window was not damaged but blown in & out by the concussion, we looked at each other then heard the dorm phone number ring.”

“At 22 years old I had been in the USAF for almost 3 years, I thought I was prepared for anything, I was wrong. Seeing the devastating effect of a massive explosion planted by terrorists wishing to kill & maim Americans prepared me for my last year in the USAF and my life after the USAF. I again took threats or possible dangerous situations lightly again, I never said it won't happen to us, and I prepare for the worst even in my current profession. I have made lifelong friends, and become a better man in every way. I am honored to have served with my brothers I rarely see but will never forget.” Tom Hughes, USAFE Elite Guard / U.S. Secret Service (Ret).

We must never forget. When we do we lose. 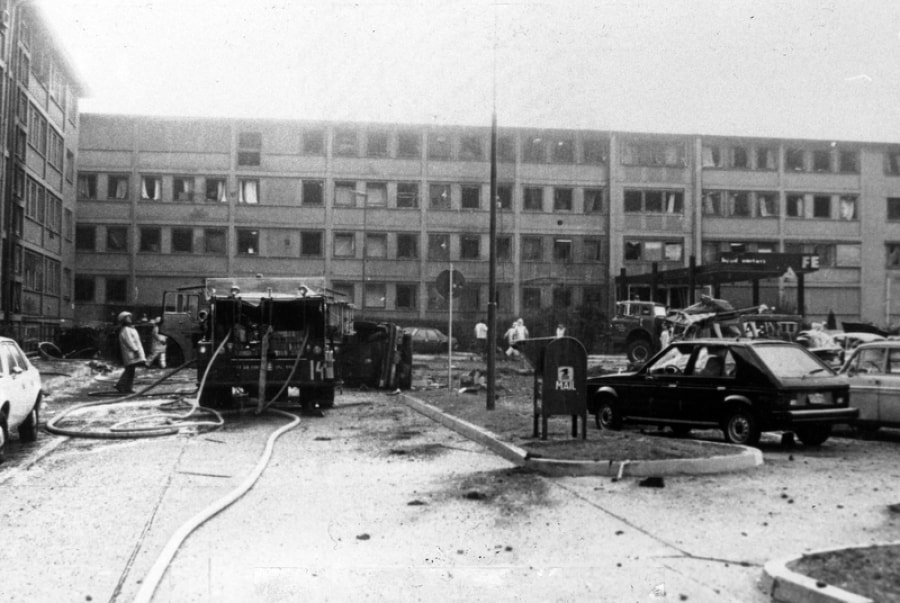 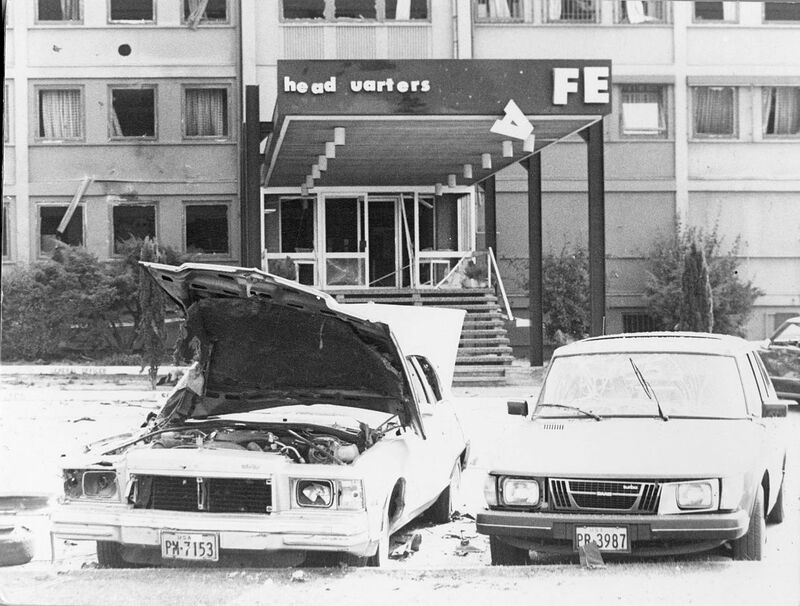