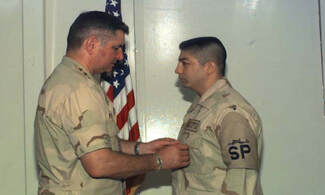 Just before 2200 hours on June 25, 1996, three security policemen, SSgt Alfredo Guerrero, SrA Corey Grice, and A1C Cliff Wager, posted as guards atop Building 131 of the 4404th Wing (Provisional) compound in the Khobar Towers complex in Dhahran, Saudi Arabia, watched as a tanker truck pulled up and came to a stop along the road in front of the building. When they saw the truck’s occupants bolt from the cab and tumble into a nearby sedan which sped away, the SPs sprang into action. Guerrero radioed the CSC and reported a probable attack in progress and then he, Grice, and Wager began running through the building shouting for everyone to “Get the hell out of the building!”106 The evacuation was barely beginning when the truck exploded with a force later estimated to be that of 20,000 pounds of TNT. Nineteen airmen, either shredded by flying glass or crushed beneath debris, died and another 500 were wounded.

For their actions that night Guerrero, Grice, and Wager each received the Airman’s Medal pinned to their BDUs by Air Force Chief of Staff Gen Ronald R. Fogleman.  The perpetrators of the attack were later identified as the Saudi branch of the Iranian-backed Hezbollah and their goal was to repeat the 1983 attack on the Marine barracks in Beruit on an even deadlier scale. Preliminary reports by DoD and House of Representatives National Security Committee investigators sent to the scene placed the blame on faulty intelligence.

Secretary of Defense William Perry, after reviewing the preliminary results of these investigations, stated that, “Our commanders were trying to do right, but ... had a difficult task to know what to plan for.” Perry commissioned retired GEN Wayne Downing to conduct an investigation for the Pentagon and when Downing released his report in August, he too placed some of the blame on bad intelligence, but he also faulted the 4404th commander, Maj Gen (select) Terryl J. Schwailer, who was to turn over command of the wing the day after the bombing, for failing to “adequately protect his forces from a terrorist attack.”

Downing also criticized 4404th SPS commander, Lt Col James Traister, for various shortcomings in security despite acknowledging that Traister had made, or tried to get the Saudis to make, several improvements in security including the posting of guards on top of the buildings – an act that saved many lives on the night of the bombing. The Downing Report also noted that, “The Security Police commander essentially served as his own intelligence officer for base defense with assistance from the Air Force Office of Special Investigations Detachment.”

To correct this deficiency the report recommended that US Air Force Security Police units assigned an air base defense mission be provided an organic intelligence capability – something that hadn’t been done since Safeside almost 30 years before. Secretary of the Air Force Sheila E. Widnall commissioned Lt Gen James F. Record to conduct her own investigation into the Downing Report charges. Record's three-volume report found that Schwalier, his staff, and his superiors had taken "reasonable and prudent" actions to protect the force.111 The staff of the new secretary of defense, William S. Cohen, asked the Air Force to do a second evaluation. That report, authored by the Air Force Inspector General and the Judge Advocate General of the Air Force, also found no grounds for finding Gen Ronald  Schwalier negligent in his force protection responsibilities and noted that Schwalier had implemented 130 separate security measures prior to the attack and had made 36 of 39 changes recommended in a recent vulnerability assessment.

It also contradicted many of the Downing Report observations critical of Lt Col Traister, including those alleging that he failed to request adequate manning, failed to ensure proper training for his SPs, and practiced poor weapons maintenance.112 There the matter lay as 1996 ended. A result of the Khobar bombing was the relocation of the 4404th to the more remote and defensible Prince Sultan AB near Al Kharj, 50 miles southeast of Riyadh, and the number of Security Police in theater increased from 450 to approximately 900. General Coleman also announced that beginning in April 1997, a $47 million package of thermal imaging equipment and night vision devices would be deployed in Southwest Asia. In the nine months following the Khobar Towers attack, $75 million was spent by the Air Force on security improvements. Coleman described the funding for security as “generous” and noted that, “Anything we have identified as a need, the funding has been there for us.”

Excerpt from Defenders of the Force: The History of the United States Air Force Security Forces 1947-200​6