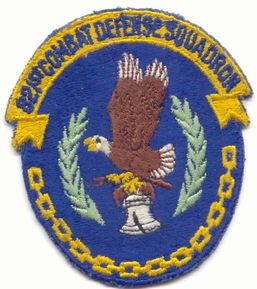 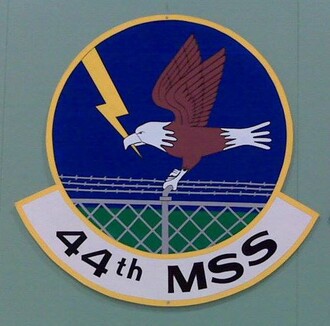 Activated: 1 Oct 1973; designated and activated as an independent unit, comprised of the field and missile support branches of the former 821st Security Police Squadron, a larger predecessor unit that had been in existence on Ellsworth AFB since the activation of the 821st Aerospace Division there (early 1962), during the initial days of the Titan I missile program.

Activated: 1 Nov 1977; designated and activated as an independent unit which, due to similar size and supervisory requirements experienced by its predecessor squadron, assumed the myriad functions of the 44th MSS’s former Missile Support Branch.

Just as Wing Security Control was the nerve center for all security operations conducted by both the 44th and 45th Missile Security Squadrons, the 45th MSS Scheduling & Dispatch office was the nerve center for the squadron itself. It tracked all assigned personnel, monitored their accumulated duty hours, posted, stand-by and crew rest schedules, coordinated daily with the 44th SMW’s maintenance deputate to provide security escorts for maintenance trips to the field, assigned CATs to provide physical security for certain sites awaiting maintenance, and scheduled MFTs to provide roving security coverage for a variety of SAC systems security requirements. Like the 44th MSS, the 45th MSS also provided field security supervisory personnel to monitor their troops in the field.
Ellsworth AFB Security Police (ICBM Security) Cold War Casualties:

[All of the above died in-the-line-of-duty in a Det 2, 37th Aerospace Rescue and Recovery Squadron UH-1 helicopter crash 11 miles north of Wall, SD, near the entrance to Minuteman LCF C-1.]

[All of the above died in-the-line-of-duty in a Det 2, 37th Aerospace Rescue and Recovery Squadron UH-1 helicopter crash near Bear Butte, South Dakota, while performing Airborne Fire Team duties during a Category I Minuteman convoy.]

[Died in-the-line-of-duty as the result of an accidental weapons discharge on Minuteman II LF Juliet 6, part of the 67th SMS, near Faith, South Dakota.]

Jacob Joseph Chestnut (28 Apr 1940 - 24 Jul 1998) Chestnut was one of the founding members of the 45th Missile Security Squadron at its activation in 1977. During his post-USAF years, while serving as a guard on the U.S. Capitol Security Detail, Chestnut was murdered in-the-line-of-duty by gunman Russell Eugene Weston, Jr. Chestnut was also the first African-American honored to lie in state inside the U.S. Capitol building.